Here is the video of our Project Launch on October 17, 2015, at the Neubauer Collegium for Culture and Society, in conjunction with the Division of Humanities’ Humanities Day:
“Virtue, Happiness, and the Meaning of Life: a Collaboration” with Jennifer Frey and Candace Vogler.

The lecture is followed by a lively audience Q&A.

END_OF_DOCUMENT_TOKEN_TO_BE_REPLACED 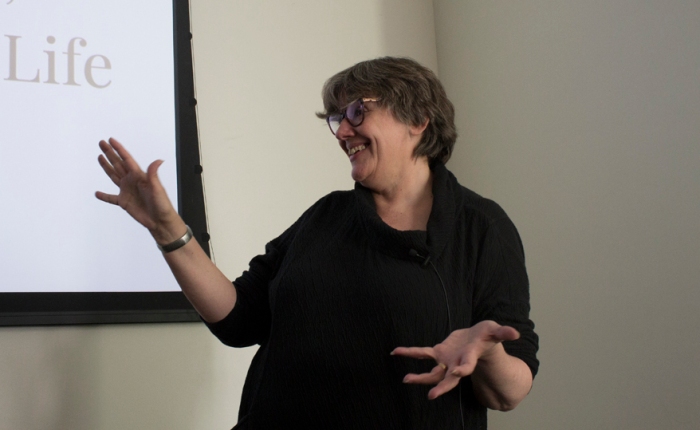 It was a capacity crowd at the Neubauer Collegium for the October 17th Chicago Humanities Day project launch for “Virtue, Happiness, and the Meaning of Life”, a talk led by Jennifer Frey, Assistant Professor of Philosophy at the University of South Carolina, and Candace Vogler, the David E. and Clara B. Stern Professor of Philosophy at the University of Chicago. Frey and Vogler spoke for about thirty minutes on the philosophical, religious, and scientific questions framing the project before taking questions from the audience. Right before the presentation, as audience members drifted into the room and both scholars rehearsed their talk, I listened to Vogler rehearse. She uttered a sentence that to my mind perfectly captures the spirit of the larger project. “We are not perfect,” she said.

She continued, “Indeed, at times, we are our own worst enemy. We all operate this way, and even very good people will find themselves messing up. This is not just due to bad luck.”

These are some of the precepts that 13th century philosopher and theologian Thomas Aquinas held to be true of the human condition, and they reflect his sense that being virtuous is an ongoing project and a journey. But why use the concept of “virtue”? Why be virtuous? Why use Aquinas to think about virtue, rather than Aristotle? What is the relationship between happiness and virtue? How can we measure happiness, or meaning?

During their presentation, “Virtue, Happiness, and the Meaning of Life: A Collaboration”, Vogler and Frey explained that their research for this project endeavors to pull apart the strands that bind virtue to happiness, and happiness to meaning, emphasizing that Aquinas believed that the truth is out there, but unlike the classical philosopher Aristotle, and unlike many doctrinaire Church fathers, he also believed the truth might take many forms. They noted that Aquinas’ sense of character and innate goodness is much better than that of Aristotle, who tended to have a much more elitist take on virtue. While Aristotle believed that virtue was primarily the province of those males from prominent families brought up to be virtuous, Aquinas believed that anyone might be virtuous, and that virtue was also to be found among women, the poor, and the uneducated. Both Frey and Vogler emphasized that the notion of virtue is important because virtue helps you not get in your own way, or sabotage your life. Human beings have a lot of trouble with balance. We aren’t always attracted to what is good for us. Virtue helps with balance. Virtue is a philosophical term with an emphasis on balance.

We are not perfect.

In short, as both speakers maintained, Aquinas has a much more expansive notion of the virtues that are missing from Aristotle—virtues such as hope, charity, and mercy—and a more diverse picture of moral exemplars than Aristotle could have imagined. Even women(!) could be recognized as mystics and moral beings. Most importantly, Aquinas brings with him the sense that we can learn from a whole range of people and their experiences. And so Aquinas, argued Frey and Vogler, is a good place to begin when we want to ask questions about happiness and meaning in relation to virtue, questions such as:

What kind of happiness comes of virtue?

When and how does cultivating virtue lead to a meaningful life?

When and how does a sound moral center anchor a meaningful life?

Both speakers set about defining “self-transcendence” as one of the project’s key concepts. Noting the difference between people whose lives appear to be successful but who are unhappy and people whose lives may or may not be conventionally “successful” but who are deeply happy, Vogler defined self-transcendence as the sense that something matters beyond the “me and mine” immediate concerns of family, job, and success, involving a devotion to something greater.

END_OF_DOCUMENT_TOKEN_TO_BE_REPLACED

Streaming live from the Neubauer Collegium. Registration for this event is full, so closed, but you can view a live webcast here on Saturday, October 17, at 2pm central time.  Click here to live stream the event. http://uchic.ag/live.

Principal Investigators Candace Vogler and Jennifer A. Frey present “Virtue, Happiness, and the Meaning of Life: A Collaboration”

We are embarking on a 28-month project funded by the John Templeton Foundation to explore and research these questions. The project, hosted by the Neubauer Family Collegium for Culture and Society at the University of Chicago and the University of South Carolina at Columbia, brings together an international gathering of 30 scholars in philosophy, psychology, and religious studies to engage in collaborative research on trans-personal, self-transcendent good as a framework for investigating fundamental questions about human life.