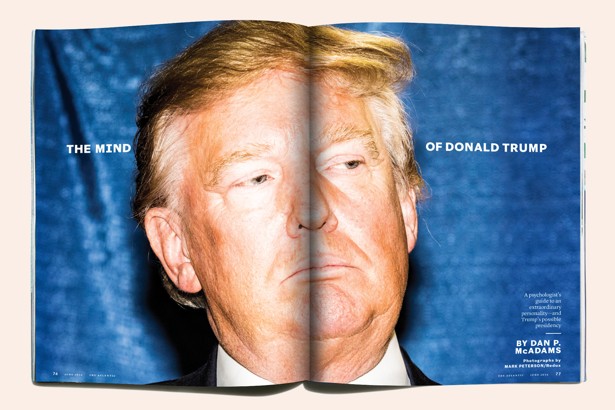 Our scholar Dan P. McAdams  is a psychologist whose work focuses on stories people tell about their lives and how their narratives help create their respective personalities. “Redemptive life narratives serve as a psychological resource for highly generative adults, providing them with the kind of personal story (narrative identity) they often need to persevere in the face of adversity and to keep focused on trying to make a positive difference in the lives of others and in society writ large,” he wrote about his research in  The Virtue Blog last October.

Recently, McAdams published a piece in the June/July issue of The Atlantic analyzing how the personality of Donald Trump might shape his presidency, writing “A large and rapidly growing body of research shows that people’s temperament, their characteristic motivations and goals, and their internal conceptions of themselves are powerful predictors of what they will feel, think, and do in the future, and powerful aids in explaining why. In the realm of politics, psychologists have recently demonstrated how fundamental features of human personality—such as extroversion and narcissism—shaped the distinctive leadership styles of past U. S. presidents, and the decisions they made. While a range of factors, such as world events and political realities, determine what political leaders can and will do in office, foundational tendencies in human personality, which differ dramatically from one leader to the next, are among them.”

In the August/September issue, readers responded to the article. McAdams also wrote about the piece, noting “Composing an evidence-based psychological commentary on a presidential candidate—one that draws exclusively on well-validated constructs in personality and social psychology and relies on reputable biographical sources—constrains an author in many ways. For one, there have been only 43 U.S. presidents, which is a small sample size for comparison . . .While some supporters of Trump may dismiss any effort to make psychological sense of the man, some detractors will not be satisfied until he has been psychologically eviscerated. I tried to perform a fair-minded interpretation—sticking to the facts as we know them and to some of the best ideas in contemporary psychological science.”

Read “The Mind of Donald Trump” in The Atlantic here.

Dan P. McAdams is a scholar with Virtue, Happiness, and the Meaning of Life, and Henry Wade Rogers Professor of Psychology at Northwestern University.

Valerie Wallace is Assistant Director, Communications, for Virtue, Happiness, & the Meaning of Life.