On June 6, 2016, Psychologist Howard Nusbaum and Philosopher Candace Vogler participated in a public conversation, held at the University of Chicago’s Swift Hall.

Nusbaum and Vogler discussed various forms of self-transcendence that provide contexts in which the exercise of virtue in daily life can operate as a source of a sense of purpose or meaning and a source of happiness. They also looked at the wisdom that belongs to ordinary human flourishing and requires a deep sense of both humility and social connection.

Their conversation was followed by a discussion with the audience about being wise and being good. 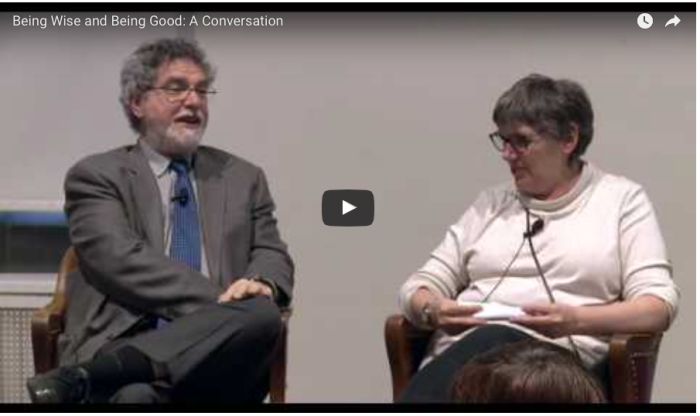 Howard C. Nusbaum is a professor at the University of Chicago in the Department of Psychology and its College, and a steering committee member of the Neuroscience Institute. Nusbaum is an internationally recognized expert in cognitive psychology, speech science, and in cognitive neuroscience. He investigates the cognitive and neural mechanisms that mediate spoken language use, as well as language learning and the role of attention in speech perception. In addition, he investigates how we understand the meaning of music, and how cognitive and social-emotional processes interact in decision-making and wisdom research. He is currently Division Director for the Behavioral and Cognitive Sciences Division in the Social, Behavioral and Economic Sciences (SBE) Directorate for the National Science Foundation.

Candace Vogler is the David B. and Clara E. Stern Professor of Philosophy and Professor in the College at the University of Chicago. She has authored two books, John Stuart Mill’s Deliberative Landscape: An essay in moral psychology (Routledge, 2001) and Reasonably Vicious (Harvard University Press, 2002), and essays in ethics, social and political philosophy, philosophy and literature, cinema, psychoanalysis, gender studies, sexuality studies, and other areas. Her research interests are in practical philosophy (particularly the strand of work in moral philosophy indebted to Elizabeth Anscombe), practical reason, Kant’s ethics, Marx, and neo-Aristotelian naturalism. Candace Vogler is the Director and co-Principal Investigator for the project “Virtue, Happiness, and the Meaning of Life.”